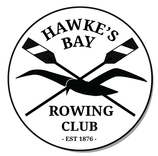 A Brief History
The Club was established as the Napier Rowing Club around 1876 in Ahuriri.  At the time there were two clubs, Napier and Union. They later amalgamated to become the Napier Rowing Club. At the time of the Napier Earthquake, the club was situated on the river at what is now Georges Drive. Following the earthquake, the shed, which had opened in 1895 moved to Clive. The shed was situated on piles the height of the stop bank, close to where the current building is with an earth/grass ramp down to the river.
In the late 1950s, the club was renamed the Hawke’s Bay Rowing Club and in the 1970s, the main section of the current shed (the bridge end) was built by club members under the Club Captain Noel Glengarry. Architect John Scott did the design as 3 members of his family were rowing with the club. Basil Jordan donated the steel trusses, and Mark Morgan did a lot of supervision which enabled the build for an affordable price.
Recollections by Tony Bone, Club Patron - September 15, 2018

What does Hawke’s Bay Rowing Club expect from its rowers?
Hard work & Determination Rowing is a high intensity sport.  It requires strength and endurance and the ability to work in a team.  In order to succeed in rowing, the rower will need to work hard, strive for excellence and continually look for opportunities to improve.  Furthermore, the rower will learn about fitness, health and nutrition to get the best out of their bodies as well as remain healthy during the rowing season.
Dedication Rowing is a technical sport, the rower will need to spend a lot of time on the water training with fellow rowers.  It is essential that rowers attend all training sessions so that they don’t let their crew down.
Self Responsibility Taking ownership of tasks, being honest, communicating with fellow rowers and their parents, doing what you say you will do and being trusted.  Safety is vital, particularly on the water.
Self Motivation Rowing requires a high level of self motivation.  It is expected that the rowers will exhibit a strong work ethic, both on and off the water.  Parents often observe that this permeates more broadly into their school/university work ethic and organisational skills.
Teamwork Rowing at Hawke’s Bay is not about individuals, it is a team sport.  Cooperation and working together are paramount.  Teamwork means working together and supporting other squad members to strive for the best performance from the whole squad.
Respect Respect for others is required through all levels of the club.  Respect all those involved and in particular the coaches and other volunteers and the decisions they make.